If you've seen the movie "Stranger than Fiction" you'll know about people becoming obsessed with numbers.  Here's a clip from the beginning of the film, which tees up the topic for today's post.

So what's the connection? Northstar's new EpicMix system has been tracking tons of numbers, and has me and some of my ski-school friends constantly comparing stats.


According to my lesson journal, I've taught:
My guests journeyed to Northstar from:
Now the numbers you're probably most interested in relate to what we're skiing on. With Mother Nature being a bit stingy with her natural snow, I'm happy to report that Northstar's Snowmaking and Grooming Team are the bomb!

Thanks to them, Northstar now has:
The corduroy has been awesome in the morning, and the only reason I'm typing rather than skiing on my day off is that one of my students passed on a number of germs.  I don't know the stats, but I'm recording my first cold of the season. 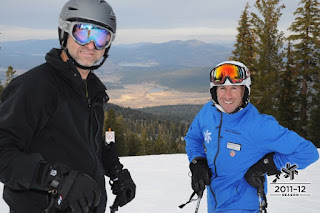