For folks whose kids have recently taken private lessons, here's a video montage made by my friend, Nat Fay.  Nat's not only a great kids' instructor at Northstar, he's also a video whiz and is trying to teach me the ins and outs of editing software.  This montage has clips from 4 or 5 December and January lessons, and showcases some of the things I've discussed in earlier posts.

Now today, while my friends and fellow instructors are enjoying a hopefully brief period of spring conditions, I'm heading down to San Francisco to meet a bunch of moms from the Golden Gate Mother's Group. I've been invited to offer advice and suggestions on a couple of topics at the Sports Basement at 6:00pm on Thursday evening.  Friends are welcome to stop in, and moms can also check out the mothers' group at the link above.

The first area we'll be talking about is tactical; how best to dress your child for the winter sports environment.  We'll take a hands-on look at helmets, gloves, boots and the rest of the gear with an eye to function over style and a focus on what will keep Jill and Johnny the happiest and safest on the hill.

The second topic is all strategy... how can a parent make exposing a child to skiing or snowboarding as fun and as stress free as possible?  We'll discuss our goals and theirs, safety on crowded bunny hills, group vs private lessons as well as approaches and things to avoid when teaching your child yourself.

As interesting as I find the actual teaching, I think the most valuable discussion will be about ways to maximize the odds of getting from your ski cabin to the slopes with all your kids, all of their gear and the majority of your sanity intact.  Believe it or not, those parents who breeze through the process and aren't fazed by snowy roads, big parking lots, crowded shuttle buses, rental shops, and ticket windows may not really be zen masters.   We'll talk about the things these parents do to arrive nonplussed and leave smiling.

Cheers.
Posted by Jay Palace - Aspen/Snowmass at 11:43 AM 0 comments

The NYT has it right! Ski school should feel like play.

I'm directing my clients, my fellow ski instructors and all parents I know to read it. I'm a huge believer in the author's view that play is extremely important to children's development.

"For several years, studies and statistics have been mounting that suggest the culture of play in the United States is vanishing. Children spend far too much time in front of a screen, educators and parents lament — 7 hours 38 minutes a day on average, according to a survey by the Kaiser Family Foundation last year. And only one in five children live within walking distance (a half-mile) of a park or playground, according to a 2010 report by the federal Centers for Disease Control, making them even less inclined to frolic outdoors."

The author also touches on how changes in parental behavior and the fears parents harbor are contributory to the reduction in the amount of time children are allowed to truly play, and play outdoors.

Here's a combination of quoting and paraphrasing which really hammers home to me how important play is:

"scientists, psychologists, educators.. say that most of the social and intellectual skills one needs to succeed in life are first developed through childhood play. Children learn to solve problems, negotiate, think creatively and work as a team when they dig together in a sandbox or build a fort with sofa cushions. The experts define play as a game or activity initiated and directed by children. So video games don’t count."

How does this relate to teaching your children how to ski?  The PSIA trains instructors with a battle cry of Safety, Fun and Learning!  We all can understand that children need to feel safe and comfortable in order to concentrate, but without fun, no learning can take place.  So does this mean you need to seek out an instructor who moonlights as a comedian or a rent-a-clown at birthday parties?  Not at all. With children of a certain age, allowing them to use their vivid imaginations to shape the fun can be enormously successful.

Just last week, I taught five year old fraternal twins who insisted I call them Butterfly and Monster, rather than their actual names.  My role in creating our games and adventures was primarily to kick-start their imaginations and then get out of the way.

I suggested we be ski-pirates, learning to say "Aargh" as we turned our way down the hill.  Monster quickly educated me that vikings were much stronger and better than pirates, and while we would still scream "Arrgh" and "Avast, this pizza be slowing me down," we would be "Viking-Pirate-Knights" hunting polar bears with light sabers, guns and canons.

As the instructor, I never give up my leadership/safety officer role, but it was perfectly fine for Monster to proclaim himself the "Big Boss" in charge of what we were searching for and who we were fighting as we explored the green and easier blue runs.  Butterfly changed her name several times and by the end of the day, had become Baby Butterfly, the captain-princess of the ship.

Throughout the lesson, we focused on making our sword/sabers straight after each turn to be ready to repel boarders (and yes, maybe I was tongue in cheek referring to those scurvy snowboarders).  We also took breaks from the game to play impromptu versions of monkey-see-monkey-do, have spontaneous snowball fights and grab a quick hot cocoa and cookies inside the children's center. (I'm not sure what Monster and Butterfly were thinking in the photo, but it may have been "Avast! There be just two cookies left here on the galley table!")

What's the take away here?  I've seen parents taking the do-it-yourself route on the bunny hill, exhorting their children to stop and go with shouts of "Make a Pizza" and "Come on, show me your French Fries!" I've also seen them alternating between cajoling and commanding a crying child to get up and "ski like Daddy!"

And at the bottom of the hill, I've heard parents watching their kids' lessons and wondering if ski school is simply daycare rather than education.  "What's with the snow angels?" "Why are they taking off their skis?"

My response is that it is neither day care nor traditional education.  A ski lesson is a playful adventure which takes place on the slopes, primarily on skis, and leaves children excited to come back for more. 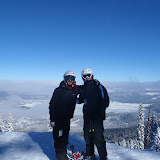 This morning, I skied with Francisco and Juan, two friends from Florida. Juan owns a kite-surfing and water-sports equipment retail store and school in Miami and is an avid snowboarder. Francisco is a skier, but the focus of our three hour lesson was primarily mountain exploration and technique refinement for skiing the steeper blue runs.


The afternoon lesson was for four great kids from LA. They all also speak Armenian, so I learned some new phrases as well. (see the photos to learn how to say "Awesome!")
Posted by Jay Palace - Aspen/Snowmass at 11:26 PM 0 comments