Tonight I'm posting a column I've just submitted for my grad school class' quarterly newsletter.  It features the experience and thoughts of three friends who live in Japan. Rather than have everyone have to wait for the issue to be printed by the school, I'll put it up here for folks to read while events in Japan are still unfolding.

It’s March 31 in the snowy Sierra Nevada. This week I had the pleasure of skiing with Erik and Alissa Christoffersen’s children; Skylar (5.5) and Theo (3.5). We shared a family dinner last night, talking skiing and catching up. Life is peaceful and good.

But, we all know that on March 11th at 2:46pm, a 9.0 earthquake occurred near the northeastern coast of Japan, followed shortly by a devastating tsunami.  After a tense 72 hours, Masato Iino, Seiji Mitsushi and Takeo Yamada had all reported they and their families safe and sound.  I’ll thank them here for taking time to let us know this good news.

Mairin Macaluso suggested I ask each to share their experience and post-quake perspective. A great idea, I thought, and all three took the time to respond.

“As an individual, I feel that I have no power to turnaround this situation. I am not a doctor, do not have special survival skills, but have to face this reality with my family and friends.  Although it is very tough, I think, the recovery of Japan should be led mainly by us, Japanese, with some support from others.

I would suggest that HBS Club of Japan and the HBS Japan Research Center open special donation accounts for alumni wishing to support Japan and Japanese students. Considering the nature of Harvard, funds could be directed to assist educational institutions with their recovery. Scholarship could be provided for students who’ve lost family but maintain a strong motivation to study. My university, Miyagi U. is a small school in Sendai, and a number of our students lost their homes in the tsunami. Harvard's annual tuition would allow eight of these students to continue their studies for a full year.

However, since the disaster's impact is so huge and spread across so many aspects of life, donors should focus on whatever area speaks to them.

“As I was in Tokyo on Friday, it seemed like just an unusually big earthquake.  On the 15th floor, our building was swinging wildly and some people got seasick.

I have noticed how the situation at the nuclear reactors has been reported differently in Japan from the rest of the world, or at least the US. Initial reports in Japan were lot more optimistic about possibility of containing the situation. Meanwhile, non-Japanese speaking people, especially expats, were
worrying a lot about the fate of the reactors. Some already left Tokyo, not because of possibility of aftershock, but because of concern about radioactive materials.”

“I was at the 10th floor of the Shin-Marunouchi Building in Tokyo, one of the newest (and thus assumed safest) skyscrapers in Japan. I knew the building sat on solid bedrock. Nonetheless, the shake was so terrible that a woman started vomiting next to me. I was horrified as I saw neighboring skyscrapers shaking as if made of rubber. Scenes from 911 flashed back and I did consider that I might die. I missed my family.

But none were killed nor injured in central Tokyo. No buildings were damaged. Yes, 3G cell phones were useless, but most of people in Tokyo managed to confirm the safety of family and friends in just a few hours. There were no utility outages and television broadcasts were up and running. People talked later that they found packet communication and SNS’s like Facebook/Twitter far more reliable than 3G voice communications. Trains stopped for a while and some people gave up on returning home until the following day.

I stayed at the office overnight and picked up my daughter who also stayed overnight at school, got back home by 8:30am. My daughter was fine, no psychological scarring. I've lost none from my family, my relatives, or from my friends. By morning, I’d confirmed the safety of nearly all management teams from portfolio companies. The quake happened on Friday and I was back in my normal routine by Monday.

The quake itself barely affected our lives in Tokyo. Compared to what the quake and tsunami caused in Tohoku, it was nothing. I kept asking to myself “what can I personally do?”, but felt helpless beyond donating money.

Through the experience I've realized the power of the internet. Whilst mass media were confused, experts actively communicated openly via blogs, Facebook, and Twitter to help people determine appropriate actions. There were, of course, misleading rumors, but surprisingly, people showed an ability to choose valuable information. Thanks to cloud computing, Facebook and Twitter never went down in Tokyo.

I was surprised by how those directly hit by the disaster were so strong, patient, selfless, and brave. These people made me proud to be Japanese. But at the same time, many people outside of the disaster area, mostly misled by provocative reports, rushed to buy things up, and some were trying to escape from “dangerous” Tokyo.

This “escape” started small, with senior level expatriates leaving, which caused some panic among naïve people suspecting access to “mysterious” special information.  I cannot blame non-Japanese speakers rushing out of Japan, as I would do the same if I found myself in China. English media reported more seriously on the risk of nuclear contamination than did the Japanese government and local language media.

I was disappointed by how some people trusted foreign media over local providers. Yes, Japan has long suffered from poor politics, but we have to trust our own ability to rebuild our nation. We have no time to be uncertain or skeptical about our policy makers during this national crisis.

Another challenge is the overwhelming mood of “save consumption.” Eating out, drinking out and even rock concerts are canceled due to political sensitivity. I personally feel people should spend more, and cheer more. Cindi Lauper was the exception and performed a show on 16th in Tokyo. Applause!

What does the future hold for Japan? The number of dead and missing exceeds 20,000 and still counting. The financial loss is estimated at $150B+. Surely there will be a dispute on further nuclear power development even as Japan has committed to significant CO2 cuts. We were in economic crisis before this disaster struck.

Nonetheless, I am optimistic on the nation’s future. Japan has experience with devastation. My grandfather’s generation lost the war and rebuilt from nothing but ash in 10 years. We will have to examine our priorities, and for my business (venture investment), more investment will be made in sustainable technologies. Let’s build a sustainable energy showcase in Tohoku.

I do not expect or ask any special assistance for our country from my section mates, in the short term.

But from a long-term perspective, I would ask leaders to pay more than their usual attention to Japan. Investors could choose to focus on how China’s economy has surpassed Japan’s and on Japan’s aging and shrinking population. But Japan will soon come back with a series of technological innovations and business models that are cost efficient, safe, environmentally friendly, and durable against disasters. Pay attention to our nation’s recovery potential and invest accordingly.

Lastly, I cannot speak for the people suffering from the disaster. Listen to Seiji for that. Don't overreact on reports with shocking photos. Calm the people around you who are reacting on the basis of poor information. We Japanese will be back!

“These are the times which bring people together. I touched base with Takeo and learned he and his family were safe, and was glad the same is true of Seiji and Masato. As my wife Mari is from Japan, we struggled to get through to family and friends. All turned out fine, though they found it hard to relax given the recurring tremors.  Our attention turned to the horror unfolding up north. It is all too easy for Mari and me to imagine the sorts of people who lived in those towns and villages -- friendly, modest, devoted and hard-working people -- and we just cannot believe the suffering they have experienced."

“The sale of Allegheny Energy closed and I’ve packed my bags and headed to lovely Juno Beach, FL. My new role is president of US Transmission Holdings, a start-up electricity transmission company with national aspirations. USTH is a subsidiary of NextEra Energy, a leader in the US and a global leader in renewable energy production. I am thrilled to be here, tempered only by the fact that Pippa and our three kids will not move down until the school year. Meanwhile the triathlon training is going OK, I've lost 30lbs but am still pretty slow.”

I’ll close by returning to last night’s dinner with Erik, Alissa, Skylar and Theo Christoffersen. The Christoffersens come up to Tahoe most every weekend and are thrilled that their kids love to ski.  Skylar and Theo also love soccer, gymnastics and swimming. Both speak Norwegian as well as English.

Erik and Alissa are currently reveling in quality family time. Alissa recently left her roles as Associate General Counsel at Google and is writing a spy thriller about Somalian pirates while getting into master-level alpine racing. Erik stepped down as Executive Director of the Mint Project / San Francisco Museum and Historical Society and occupies non-family time with angel investing.

The Christoffersens extend an invitation to any section mates wishing to visit them in Tahoe. I’d suggest coming during the winter months, as long as you don’t mind their five year old skiing rings around you!

To end the blog posting on a happy note, I'm inserting a picture of the Christoffersen family, which should also appear in the printed newsletter. 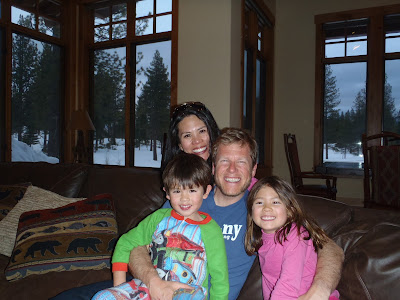 Email ThisBlogThis!Share to TwitterShare to FacebookShare to Pinterest
Labels: Non-skiing